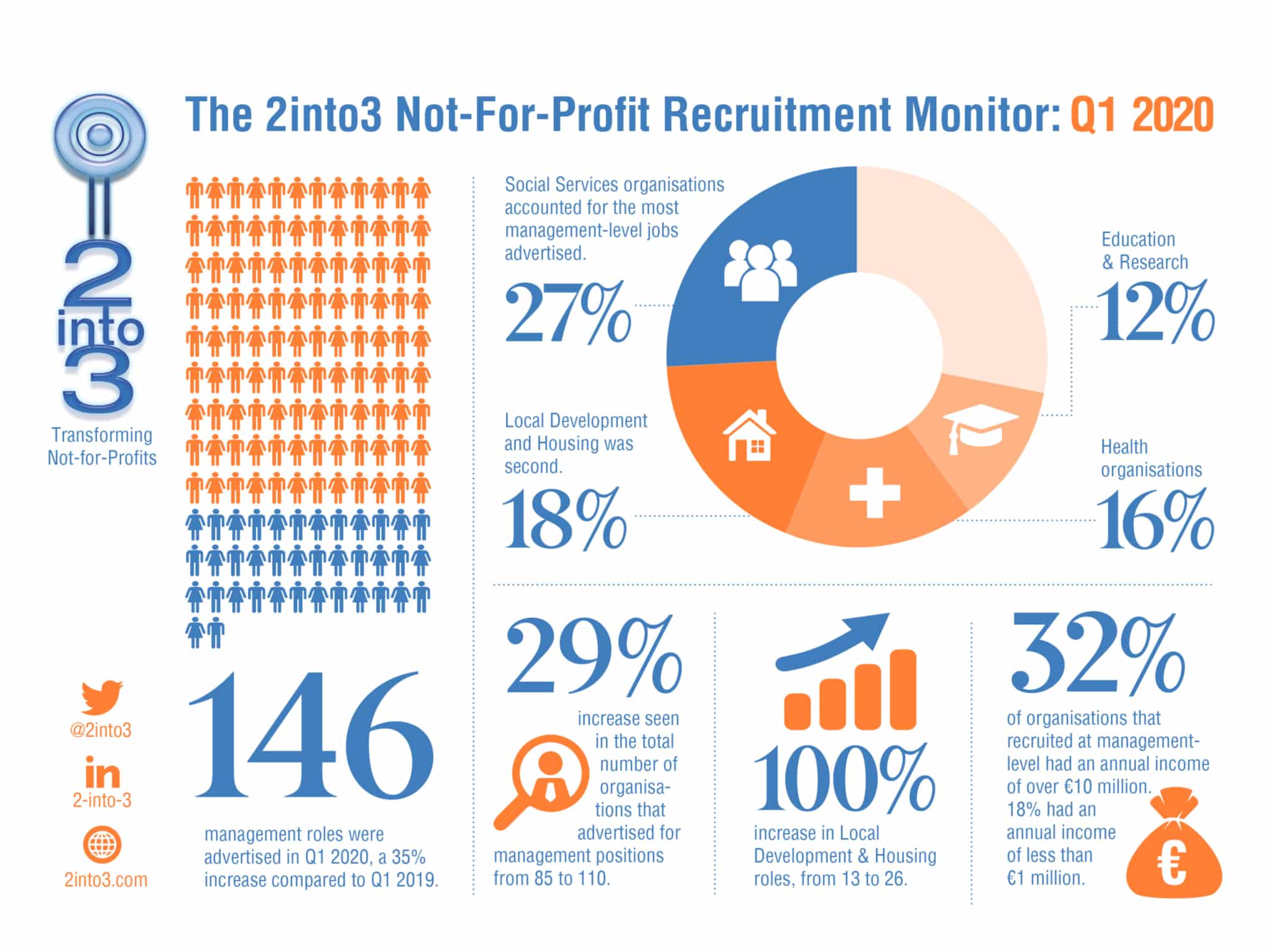 Like everything else right now, the 2into3 Quarterly Recruitment Monitor for the first three months of the year has a somewhat different feel to it than usual. Under normal circumstances, we would be looking at January to March this year versus last year and seeing how this might tell us about the trend for the year ahead.

However, as the country took a turn for home in the last few weeks of March, these figures are now to be seen as a historical record rather than a guide to the future. Having said that, we still feel it is important to track what has happened and to see what else we have learned in the month since, so we have decided to publish the Q1 2020 statistics as normal, but with some additional, interim analysis on April alongside it.

The big number to take away from the first quarter of 2020 was the 35% increase in the number of senior roles in the not-for-profit sector that were advertised, up from 108 to 146. This covered a range of different sub-sectors, with Social Services accounting for the highest number (26%), followed by Local Development and Housing (18%). Health (16%) and Education & Research (12%) were also well-represented.

It was also interesting to note that the number of organisations advertising also rose in this period, up from 85 to 110, or 29%. Of this 110, Social Services (25.5%), Local Development & Housing (21%) and Health (18.2%) were the most active areas. Further analysis showed that one-third of those recruiting had an annual income of over €10 million, while just under one-fifth were working with an income under €1 million per annum.

In terms of the roles that we identified, there were twice as many at CEO/Executive Director level (22, up from 10) and a 30% increase in the number of Service Delivery roles. Most of the other roles remained at similar levels, with the notable exception of Finance, which jumped from 2 to 15 year-on-year. Fundraising (29%) and Service Delivery (27%) accounted for the biggest share of roles advertised.

Moving away from the pre-Covid-19 world, we have also been tracking recruitment activity in April versus 2019 and, unsurprisingly, our data shows a drop in the headline numbers, with 40% fewer senior-level roles advertised during April 2020 (37) than in April 2019 (62).

This reduction was experienced across almost all functions, with just CEO (8 versus 7) and Finance roles (3 versus 1) bucking the trend and increasing year-on-year.

Almost every sub-sector experienced a drop in recruitment, with a few (local development and housing, philanthropy and voluntarism and religion) remaining static. The biggest drops were recorded in social services and education and research.

While the number of smaller organisations (<€1m income) that were advertising fell significantly, from 11 to 5, the reduction in larger organisations (>€1m) was slightly less pronounced: 23, down from 27.

We recognise that such a snapshot does not in any way represent a detailed an empirical analysis of the current situation. Indeed, our own experience in 2into3 has been quite different, with 4 new senior recruitment assignments commenced since the lockdown began. One of these was for a CEO role, while the other three were all fundraising and development positions.

With that in mind, we remain hopeful and quietly confident that there is cause for optimism in the sector. Now, more than ever, not-for-profit organisations need to have the best possible people leading them and driving their missions forward. Gaps in this leadership can offer a short-term respite in terms of cost savings, but it is a false economy if these gaps lead to longer-terms issues once we come thought the other side of these challenging times.